APPLICATION OF THERMAL SPRAY AND CERAMIC COATINGS AND REINFORCED EPOXY FOR CAVITATION DAMAGE REPAIR OF HYDROELECTRIC TURBINES AND PUMPS dtic.mil Nonfusion repair methods such as thermal spray and the use of reinforced epoxies have several advantages when compared to welding techniques.

Overview of the Problem and Repair Technology cecer.army.mil Techniques available for cavitation damage repair including: (1) weld overlays and inlays, (2) reinforced epoxy coatings, and (3) thermal spray coatings. Of these methods, the one most commonly used is the weld overlay because it produces the most durable coating... 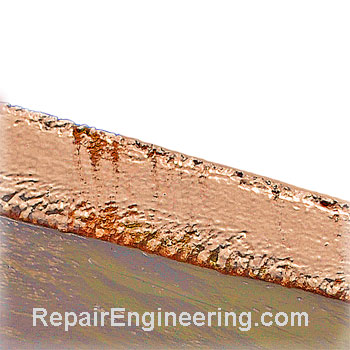 Gas bubble formation, also known as boiling, is dependent on the temperature and pressure of a liquid.

Gas bubbles form as the pressure of the fluid decreases during the cavitation cycle.

At the next phase of the process, as the pressure of the fluid increases, the gas bubble becomes compressed.

With a further increase in the fluid pressure, the gas vapor pressure inside the bubble reaches the point that it is unable to support the external pressure of the surrounding fluid.

When the gas bubble collapses, or implodes, a high-velocity jet of fluid impacts the surface of the part. The impact not only destroys the surface film at that location, but also can damage the base material beneath that layer.

When corrosion is involved, it accelerates the rate at which the pitting damage occurs.


Cavitation Questions and Answers:
What types of parts can be damaged by cavitation?

All parts that are in contact with a high-velocity moving fluid with changes in pressure have the potential to be affected by cavitation. Some examples include...

What can be done to help keep caviation from occurring?

Cavitation pitting damage can be difficult to prevent because it is a function of several variables, including...

In general, cavitation prevention techniques consist of either a change to the process, or design, or a combination of both. Here are some general guidelines...

Rather than changing the material of an entire part, it is sometimes possible to achieve the increased material hardness by weld cladding, hard-facing, or by over-laying a protective plate to an existing part.

If none of these mitigation steps are feasible to implement in a particular application, it may be necessary to plan to repair or replace as part of a regular maintenance outage cycle.

Copyright © RepairEngineering.com. All rights reserved.
Content and images may not be reproduced in any way without permission.